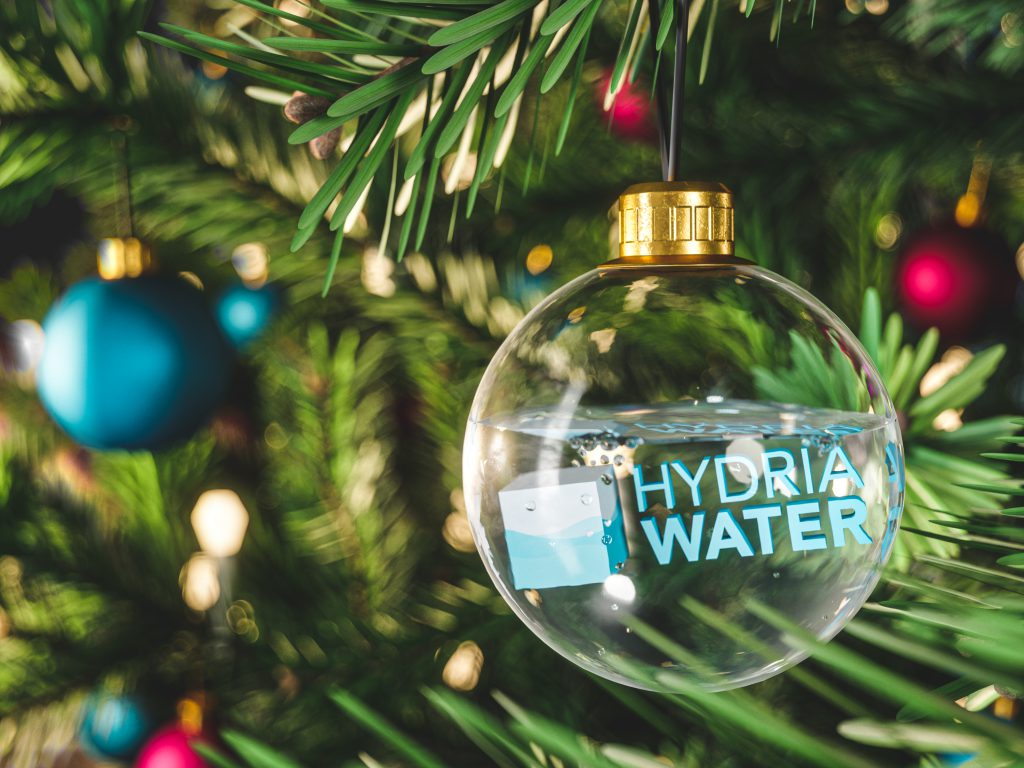 Happy Holidays from everyone at Hydria Water! We hope your holidays will be filled with joy and laughter through the New Year.

Hydria Water recently visited Hong Kong to assist with the bringing into operation of the six mechanical-step type screens that had been delivered to the Kwun Tong Sewage Treatment Works.

– This one of our largest Cross Screen installations so far in terms of size. We were there before the commissioning took place, inspecting the machines and checking that the installation had been performed correctly before the treatment works came online, and participated in this process, Philip Carlsson, Sales Engineer at Hydria Water, says.

Sjölunda is one of Sweden’s largest wastewater treatment plants, and collects the wastewater from the homes of 300,000 people. During the expansion of the plant there were problems with delays, and VA Syd chose to rent a mobile inlet screen system from Hydria Water.

The Sjölunda Wastewater Treatment Plant is situated in the northern part of the port of Malmö, and receives roughly seven bathtubs (c. 1,350 litres) of wastewater per second. The plant was opened in 1963, and due to climate change and an increase in population it is currently being rebuilt in order to be able to handle larger volumes. Due to delays, VA Syd (an association of local utilities authorities in south-west Sweden) experienced operations-related problems and consulted Hydria Water regarding potential solutions.

– The renovation of the existing inlet was delayed, and the new biological treatment step could not be put into operation as the Sjölunda plant’s existing screens were not effective enough. We suggested a mobile inlet screen system as a temporary solution, which has worked out very well for the client, says Philip Carlsson at Hydria Water.

The mobile inlet screen system was installed in May and will be in place until the end of the year, when Sjölunda’s new inlet with screening panels will be completed.

– We also recently sold a mobile inlet screen system to Iceland, and have had quite a few other requests. Many have realised that this is a very good solution in emergency situations and as a temporary measure during the renovation of wastewater treatment plants.

Recently, Hydria Water has received more interest than usual from Asia, and currently has several parallel projects and inquiries ongoing.

– We are responding to a large number of inquiries from Asia at the moment. It is a very important part of the world for us and challenging as the large population makes for extremely large flows to handle. This requires us to design and build large machines with the right capacity, Rikard Karlsson at Hydria Water says.

The Kwun Tong Preliminary Treatment Works is one of the larger projects and is currently undergoing an extensive upgrade. For Hydria Water this means that the order will be fulfilled in three deliveries, the last of which will be completed in 2020, including a total of six mechanical step-type screens.

– The channels are four metres deep, and we are building machines with a discharge height of 5.5 metres. 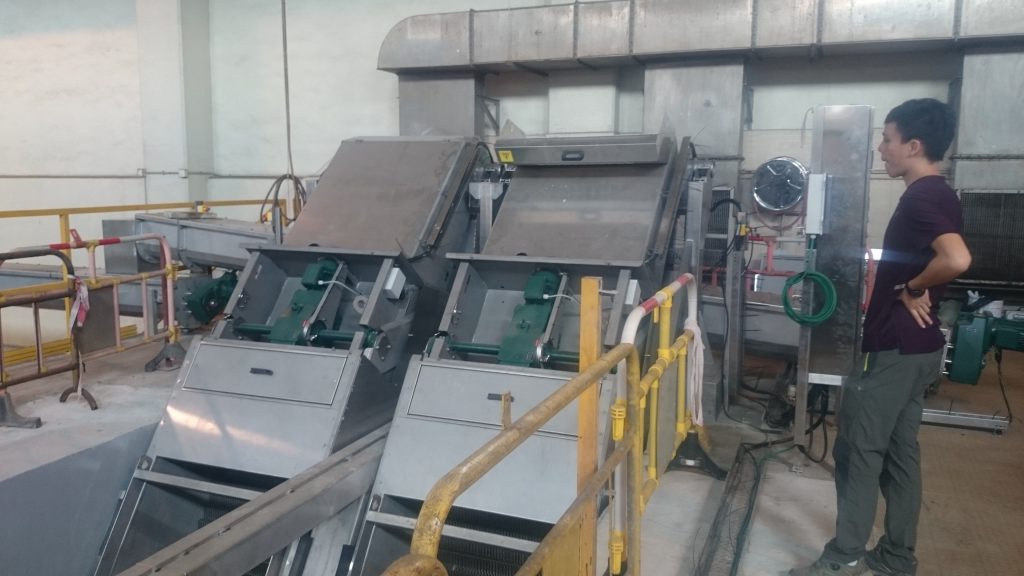 The Stonecutters Island Sewage Treatment Works in Hong Kong is a much-discussed project that has attracted a great deal of excitement, and to which Hydria Water delivered Mellegård & Naij’s products for several years. Soon, the last shipment to the sewage treatment works will leave our premises in Skövde, Sweden.

The Stonecutters Island Sewage Treatment Works is one of the world’s largest, treating roughly 2.5 million cubic metres of water every day from roughly 5.7 million people. This, together with the Changi Water Reclamation Plant in Singapore, is some of the largest project Hydria Water has ever undertaken.– It means a great deal to us to be contributing to such a large and amazing project that everyone in the industry is talking about. Our machines have been installed throughout the inlet and in the subsequent screenings handling process, and we will soon complete our last delivery, Rikard Karlsson at Hydria Water says.

– We have delivered eight Cross Screen XS mechanical-step type screens and eight conveyors. As the sewage treatment works is intended to handle large flows the channels are three metres deep, which meant that we had to build a mechanical step-type screen with a discharge height of 4.5 metres – which is among the highest we have ever delivered. The dimensions of the conveyors were between 7.5 and 15 metres, Rikard explains.

Over the course of the project, documentation and photography during manufacturing have been very important. This is particularly true prior to shipping, which takes 45 days from harbour to harbour.

– We sent a first test shipment. The client was satisfied with our products, considered them to be of high quality and wanted more of our machines, which of course felt very good. We have visited the site several times, among other times during the test run, when the flow was tripled so as to really test our machines!

The Stonecutters Island Sewage Treatment Works has undergone upgrades and alterations in several steps so as to achieve a cleaner environment in Victoria Harbour.

Step 1
During the first step, 23 kilometres of tunnels were dug underground in order to connect the seven water reclamation plants of Kowloon, Tsing Yi, Kwai Chung, Tseung Kwan O, and eastern Hong Kong Island to the Stonecutters Island Sewage Treatment Works, with the goal of purifying 75% of the wastewater in the harbour area on Stonecutters Island.

Step 2
During Step 2, eight water reclamation plants from northern to southwestern Hong Kong Island were connected, via 21 kilometres of underwater tunnels beneath the harbour basin, to Stonecutters Island Sewage Treatment Works, which at the same time was expanded and upgraded to handle the increased flow. Since of the completion of this step, 100% of the wastewater from the area around the harbour has been treated at the Stonecutters Island Sewage Treatment Works.

Cheung Sha Wan is a large food market in central Hong Kong to which Hydria Water is to deliver four Centerscreen CG and two Multiscreen Rake MR, which are to be used to treat raw water for tanks containing live fish. The machines are eight metres high and, due to the low ceiling height and constraints of the indoor space, will have to be assembled on-site and shipped from Sweden in parts.

– Shipping our products in parts forces us to think innovatively and in new ways in relation to a simple assembly, but at the same time this method saves a great deal of shipping space and we are able to ship the machines in one container instead of three. We will be on site to perform supervision during the assembly, and a delegation will also visit us in Sweden to learn more about the assembly process and the machines, Marko Kunerus Sales Manager at Hydria Water says. 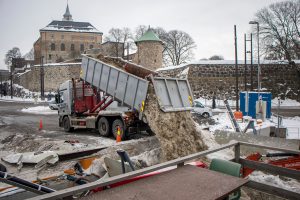 Due to stricter environmental requirements, Oslo no longer has the option to simply dump the snow removed from the city’s streets in the fjord, as has been done in the past. The Terje snow-melting system is a climate-smart pilot project that NCC has developed on a commission by the City of Oslo, and purifies snow using Hydria Water’s screens.

Terje weighs 500 tonnes, is 50 metres long and 26.5 metres wide, and operates at a depth of 3.5 metres below the surface of the quay near the Akershus Fortress in Oslo, where it is docked from mid-December to March. During the high season, snow is dumped into Terje’s intake grills on the deck of the barge by up to 20 fully loaded lorries per hour, then purified in several steps. Sea water is used to melt the snow. Up to 1000 cubic metres of water is collected from a depth of 24 metres, where the water temperature is typically between 4 and 10°C in the winter. At a sea water temperature of 9°C, it is possible to melt roughly 1000 cubic metres of snow per hour; if it drops to 4°C, the rate of melting is approximately 500 cubic metres per hour.

The efficiency of the purification process is 70% on average, and over 90% of the heavy metals in the snow are removed. The first step is a sedimentation process, in which stones and gravel are screened out when the snow is mixed with sea water and run through Hydria Water’s screens. The water is then transported through purification channels equipped with micro filters and lamella clarifiers. Over a tonne of oil per season is also screened out before the purified water is eventually released back into the fjord.

This website uses cookies to improve your experience while you navigate through the website. Out of these, the cookies that are categorized as necessary are stored on your browser as they are essential for the working of basic functionalities of the website. We also use third-party cookies that help us analyze and understand how you use this website. These cookies will be stored in your browser only with your consent. You also have the option to opt-out of these cookies. But opting out of some of these cookies may affect your browsing experience.
Necessary Always Enabled

Any cookies that may not be particularly necessary for the website to function and is used specifically to collect user personal data via analytics, ads, other embedded contents are termed as non-necessary cookies. It is mandatory to procure user consent prior to running these cookies on your website.